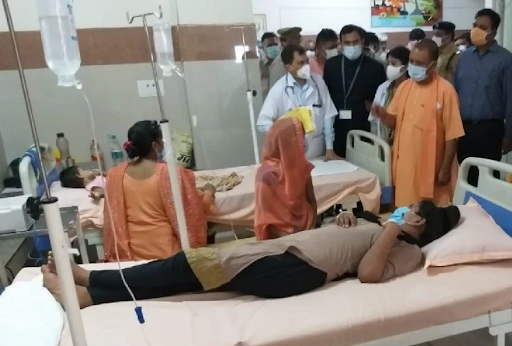 The flare-up of dengue and viral fever is on the ascent in the Firozabad area. In excess of 50 patients have passed on in 15 days. In excess of 30 kids are among the dead. Considering the circumstance genuinely, DM Chandravijay Singh has announced a leave of all private and government schools from class I to VIII for seven days.

According to the DM request, all administration, perceived, CBSE, and ICSE board schools from class I to VIII will stay shut from 31st August to sixth September keeping in see the wellbeing of the understudies. In the event that any school has dismissed the request, a move will be made against it. The request was given after boss priest Yogi’s visit.
Boss clergyman Yogi Adityanath visited Firozabad on Monday. He met patients experiencing viral fever and dengue at a government clinical school. He held a gathering with the authorities and communicated dismay over the blunder. He then, at that point, arrived at Sudama Nagar. Here, he established the framework stone for the groups of the youngsters who kicked the bucket of fever.

Boss Minister Yogi said 32 kids and seven grown-ups have kicked the bucket of fever. A nitty-gritty request was directed and a move was made against the offenders. He coordinated to give better therapy to the debilitated. The Chief Minister was joined by serve accountable for the area Rajendra Singh pseudonym Moti Singh, Rajya Sabha MP Anil Jain.

The main priest said a speculated dengue case became known on August 18. Without any data, individuals kept on going through private treatment. The new ward was worked here when the data was gotten. Three passings have occurred in the clinical school where two broads were dead. 32 kids and seven grown-ups have kicked the bucket in private medical clinics and homes. Clinical instruction and reconnaissance groups from Lucknow are sending examinations.